Life As A Moon

Where I write about Anything and Everything

Happy Four-Twenty for all my pot heads/stoners out there!!! Today is your day to be free and smoke that: Ganja, that Mary Jane, that Weed, that good shit, that dope, that… okay I ran out of other ways to say marijuana…sorry I’m not really savvy in that department. For those of you that don’t know what 4/20 means (besides it being the 20th day in April, and obviously the day before my glorious birth) you shall find out right now!!! As my trusty Urban Dictionary has told me it’s a “smoking holiday”.

I learned about 4/20 in high school and I never really cared to look into why people get souped (I threw it back old school with that one kid, I’m just not sure if I spelled it right…sooped? Souped? Idk…whatever). Any way I never understood why people were so excited to smoke on this particular day when they smoked every other day…it made no sense to me. But today I’m going to look up (using Google of course, because Google is life and anybody who disagrees can shove it up their bum holes) the origin and meaning of 4/20.

I have returned after 20 mins of looking up the meaning of 4/20, and I’m just as confused as I was when I first started. Wikipedia just blabbed on about blah blah blah consumption of cannabis…blah blah blah cannabis subculture… blah blah blah cannabis itself. See what I mean, Lost as F…bleep. So I shall tell you what I think it means… it means; just go smoke some ganj with some of your home skillets (no I don’t mean frying pans…that’s just another way I say homies or “friends”) talk crap about what life means…you know get all philosophical and shit, and just munch out later.

In the spirit of Four-Twenty, I’ve decided with the help of two of my slutties (Big Booty Judy and Sluttie McSlutterson) and a slutto… a male sluttie, I couldn’t think of anything better at the moment I’ll make something real good up next time…(the gigolo…I don’t think I like this one I think I like slutto better…okay any way Sluttos name is Frienemy). Today we were talking about past (pass the dutch baby… shake shake shake your stuff ladies… that was courtesy of Missy Elliot) sorry I got distracted, past experiences we’ve had with Jane…Mary Jane…and I’ve decided to share two of my experiences with you lunatics. The first time I had some of that good shit I was like… okay I’m not going to incriminate my self and say how old I was because you know mum reads this…any way I was at a friends house and while I was at this persons house I started getting paranoid and wondering “holy shit what if my mum sees my eyes and just knows what I’ve been doing or “ and then I lost my train of thought because ganja did that to me on the reg (regular…I like to shorten words because I like how they sound). The next thing I remember from that day was having the WORST cottonmouth ever, wanting to eat everything in sight, and of course having the BEST sleep of my life!

This next time was the most recent and last time I ever smoked Mrs. Jane (I feel like if marijuana was a real lady she would be a married, respectable lady just trying to make some dough for her four kids and her Marine Vet Husband…idk, that’s just me). It was about five or six years ago and a couple of my friends from school (one of the many I’ve attended…I could seriously be a spokes person for indecisive people) as I was saying, a couple of my friends and I hot boxed in a car (for those who don’t know what hot boxed means: when you smoke in a small room, closet, bathroom, or in my case a car… where there are no open windows or doors, basically no where the smoke can escape to…it is only allowed to go in your mouth and nostrillies…nostrils I like to make up words from already made words). We smoked so many different kinds of weed, I didn’t know that was freaking possible, but we did; and I became a little on the sickly side. Once we got out of the car Slutty McSlutterson and I started walking to our dorm and I told her “yo I don’t feel good I think I have to throw up”, where she turned around and said some variation of… not out here stupid. But I either didn’t want to listen or I just couldn’t hold it in. I personally think I couldn’t hold it in, but who knows I was kind of an asshole
(still am at times)…so I looked around to make sure there was no CP (Campus Police) and threw up on the side of my dorm. After I threw up though I was totes (totally…I’ve already explained to you why I do this) ready for some munchies! Okie Dokie, I’ve said waaaaay too much and now it’s time for me to go…Peace Out Dudes!

“On Wednesdays, we wear pink”. You might be wondering why I quoted Mean Girls, and my reasons are:

The name of the quiz is…drum roll please… I said…drum roll please…Damn it Tony pay attention (*throws chair at Tony*)!! Sorry I just had a Whiplash moment… if you haven’t seen Whiplash yet, IT’S. A. MUST. , That movie is amazing. As I was saying the name of the quiz is… tatatatatatata (thank you Tony that was beautiful) Which One Of The Plastics Are You? I got freaking Cady Heron! 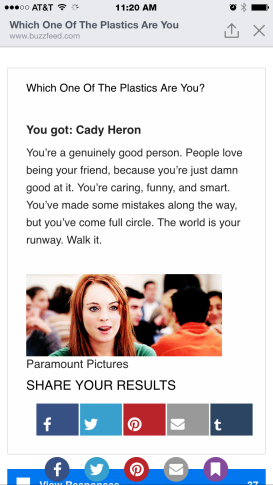 Honestly who wants to be Cady…besides the whole living in South Africa, which sounds pretty cool, she’s too nice…BORING! I wanted to be Regina George. She is freaking amazing…she’s such a bitch and I love it . I think its HIGHlarious, aaaand I’m also slightly obsessed with Rachel McAdams. Although, I do like Fetch (even if Regina kept shutting it down… “Gretchen, stop trying to make fetch happen! It’s not going to happen.”) I can TOTES make Fetch happen.

Keeping in the spirit of High School I did a little reminiscing and a small amount of threatening bodily harm with my friends yesterday through group text. While I was at work there was a customer and her kids names were Emily and Fable (that’s not the boys real name by the way). Any who, in high school I had the biggest crush on a guy named “Fable”, he’s my brothers friends brother, and okay it was more than a crush it t’was LOVE…the truest love of them all…hehehehe (I laugh through my pain). So I decided to text my friends to tell them what I always knew was true…that we were meant to be… I just wasn’t sure if it was in a happily married with like 9 kids situation or if we were just meant to be siblings …so I’m kinda pissed at you FATE!!! How could you break my heart more than it already is? If you’re wondering why I shan’t be with the former (okay maybe I’m not totally over it…I’m holding out till he gets married…because I’m not a home wrecker, well I hope I’m not, I’ve never been in that situation) any way, the former love of my life is currently in a relationship; with some Whore…okay she’s probably not a whore I don’t even know this girl, she’s probably one of the nicest people ever, but I don’t care!!! It’s the principle that matters okay…sheesh! She’s a thief, even though he was never technically mine… blah blah blah, whatevs! I think I reminisced too much and the teenager inside has emerged. On that note, I’m out this bitch.

P.S. I want to say Happy Birthday to Ditzy Doodle, one of my slutties, Love you Slore ( slut whore for those that don’t know what that means).