Life As A Moon

Where I write about Anything and Everything 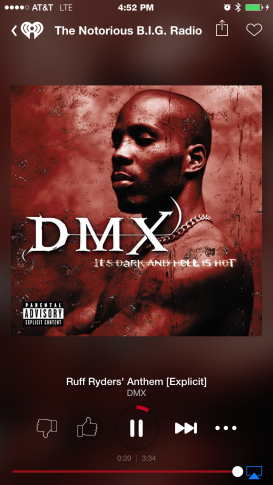 Grrrrrr, ruff ruff…. Stop, Drop, Shut’em Down open up shop…OOOO NOOOO that’s how Ruff Ryders Roll (Thank You DMX and the Ruff Ryders for that amazing intro). For the past two days I’ve been feeling real Gangsta…nah mean!! Yesterday I was in the mood to listen to some Tupac Radio on iHeartRadio (which basically consists of obvisously the man Tupac, Snoop Dogg, Biggie, Dmx, Mobb Deep, Big Pun, and all that good stuff), and I haven’t stopped listening since. This morning the song by NWA, you know the one (F the police) came on and of course I drive right by a cop car. I felt like he/she heard it and was going to pull me over and I was freaking out, but then I looked in my rearview (like five exits later… because you know, I didn’t want to attract anymore attention to my self by constantly looking back and slowing done…I swear there was some logic in that) and when I glanced up that cop was no where to be found. Yasssss!!!!

On my way home I was feeling extremely proud of my self for escaping the cops (earlier in the morning) that I was about to go to a tattoo place and get THUG LIFE tattooed across my belly (I didn’t do it by the way… my mom doesn’t approve of the tattoos I have now imagine if I came home with that…my ass would’ve be kicked out). In the middle of my bars (I hear that’s what rappers call it) of Biggies Juicy, I started thinking…holy shit I was like younger than 10 when I first heard these songs and I was rapping along to them then like a boss. But then you think about the things these rappers were saying… scandalous, I feel like the Thug Life gods have just revoked my lifetime pass!!!

Okay on a completely different subject, WTF IS GOING ON WITH THIS KYLIE JENNER CHALLENGE!! Are these kids stupid!!!! What do these kids expect is going to happen by sucking their lips into these shot glasses or whatever the hell they’re using; that they’re going to get these B.E.A.UTIFUL full lips. NEWS FLASH MOFOS that is only attainable if you were either born with them or get some work done on them, nah mean jellybean. I swear these kids are freaking nuts these days…and I thought I was freaking crazy when I was younger. I just don’t understand why these teenagers are trying to emulate another person. Just be yourself and love what was given to you. LOVE YOURSELF PEOPLE!!

OM YEEZUS!! THIS VINO IS GETTING TO ME BRAH!!! I’ M A LITTLE LIGHT HEADED!!! I’m trying a new Vino for tonights occasion its Barefoot Shiraz. It’s not really my cup of tea, but I’m still drinking it because I can’t say no to Vino. It’s a drier wine than what I like, but I put some Sprite in that shit and made my self THE most DEEEELISH Red Wine Spritzer!!!

OOOO so I took another Facebook quiz yesterday. The quizzes name is Which Five-Letter word describes you perfectly? And apparently not only do my friends and family think I’m CRAZY but so does Facebook. I don’t know if I should be off

ended or… actually I’m okay with it. You, Facebook, you know me well!! On that note I say good day. This wine is about to have me laid out.

Emily (This post makes absolutely no sense and. I. LOVE IT!!!)

P.S. AVENGERS AGE OF ULTRON COMES OUT NEXT FRIDAY!!!! AHHHHH!!!!

Let me know what your thinking Cancel reply